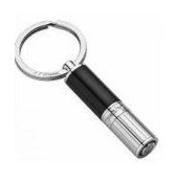 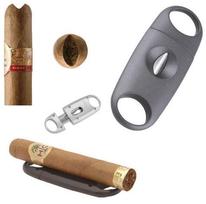 Before lighting your cigar you must cut the closed capped end off the cigar before you can smoke it. The closed capped end of a cigar is where you put your mouth and you must cut it to allow proper air to flow through the cigar, otherwise it simply won't draw. Cutting a cigar is important because a bad cut can damage a cigar and ruin how it smokes and tastes. There are three basic types of cuts, the straight cut, the wedge (or V) cut, and the hole punch. The type of cut to make is based wholly on personal preference and the size or the shape of the cigar. Most experienced cigar smokers may not always make the same type of cut or use the same kind of cutter. The straight cut is the most common type of cut and is typically done on cigars with a smaller ring gauge. 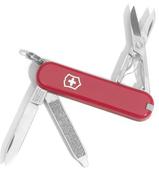 V-Cutter Method.  Another alternative on how to cut a cigar is using the V Cut Cigar Cutter, which will give a V shaped cut in the end of the cigar. This style of cut exposes more filler and makes it more easy to draw smoke through the cigar. V-cutters look like guillotine cutters, but cut a wedge into the cigar cap rather than completely removing it, creating a cleaner looking cut. Good V-cutters penetrate deeper into the filler than straight cutters, and some smokers prefer them for thicker gauge cigars. However, dull V-cutters can result in bad cuts that are too deep into the cigar, which can result in an uneven burn.

Cigar Punch.  Some cigar smokers use the cigar punch. The punch does not exactly cut the cigar, instead, it punches/cuts a hole in the end of the head of the cigar to allow a draw. The punch is used by gently applying it to the center of the head of your cigar, push and twist into the head, and you are done. This method is preferred by some, as it exposes less of the filler and binder and reduces the chance of tobacco ending up in the mouth. Critics of this cut maintain that the smaller hole does not allow as much smoke to come out, and the hole is often clogged with tobacco buildup, which can then ruin the flavor of the smoke as you draw in into your mouth. Also, punch cutters are not well suited for any but parejo shaped cigars. Won’t work on a figurado such as a torpedo. Cigar punches come in several different types and gauges. The cigar punch is easy to carry and most have a ring that allows you to put it on your keychain, or even may be a part of your lighter.

Other Cutters.  In an emergency, when you have cigar smoking opportunity, and no cutter, you can utilize other instruments as a last resort. Actually one of the best and easiest cigar cutters is the scissors on a mini-Swiss Army Knife. Just make a series of small snips in a square or circle on the cap of the cigar and remove the wrapper. Almost like a punch, but really easier.

The last resort to getting a smoke path into your cigar is just to gnaw a hole in the end cap with your teeth. Only in an extreme circumstance, and never in front of other cigar smokers as it will disgust and embarrass them. 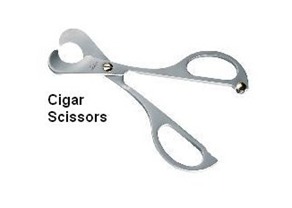 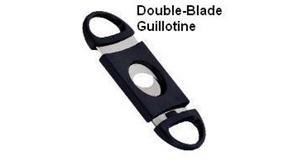 The double blade guillotine is preferred by many experienced cigar smokers because it usually makes a cleaner cut. The two blades allow equal pressure to be applied on both sides of your cigar for a smoother cut. Another type of cutter is the cigar scissors, which are also used to make straight cuts, and is a great choice for cutting the cigar at the exact spot you intend.  Cigar scissors are one of the preferred tools for many aficionados and they do take some time to get used to and are not recommended for the novice

The straight cut on a parejo (straight tube shaped) should be made just at the curvature of the shoulder at the head of the cigar.  Don’t cut enough, and the draw is restricted or troublesome.  Cut too much and run the risk of the wrapper becoming loose and the head of the cigar becoming “un-tidy” as you smoke through it. An easy measurement technique is to lay your cutter down on a flat surface (table or bar top), insert the head of your cigar into the cutter and spring the cut. Usually just that little bit of cigar cut is just right.

Some smokers that prefer torpedo or other figurados without a straight rounded head will cut with a single blade or double blade guillotine, but with the cutter at about a 30° angle with the cigar. This opens up a larger smoke path in the tapered end.

Remember that a bad cut can ruin a good cigar, so it is worth investing in a good cutter because it doesn't take many ruined cigar experiences to add up to the cost of premium cutter.

The most common tool for making a good cut on a cigar is the cigar cutter. Cigar cutters come in numerous designs and styles. The most common cigar cutters are guillotine cutters, which are the easiest to use, especially for the beginner. There are single and double bladed guillotine cutters, which are used to make straight cuts and are very effective if the blades are sharp. The single blade guillotine cutter cuts from one side and applies pressure to one side of the cigar. This type of cutter is typically effective if the blade is sharp, but can compress your filler and cause draw problems. It can also create a pull or tear when cutting through the other side of your cigar, especially if cutting with a dull blade.

How to Cut Your Cigar, and With What ... 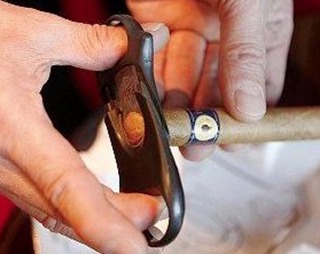 At the Cutting Edge