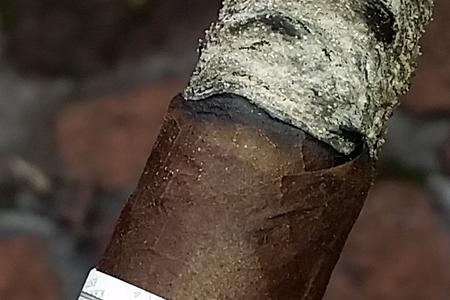 Very small, white spots that appear along the burn line of a good cigar most times indicate TOOTH or Toothiness in the wrapper.

These spots come from oils and moisture in the wrapper leaf that are released with the heat of the burn.

They are NOT a bad thing at all.  In fact, indications of tooth make a point of the condition of the wrapper as well as the strength, thus contribution to the cigar's overall flavor profile. 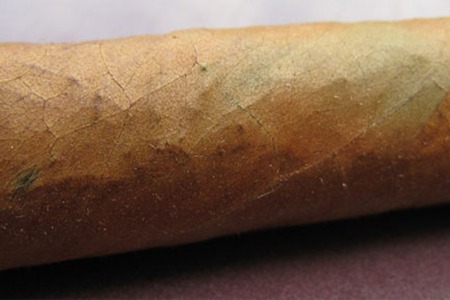 What are those green patches on my cigar? Assuming the green patches are flat and clearly just color distortions and not growths like mold, they are harmless and will not impact the experience in any way. They are caused by imperfect conditions during curing for the most part. Any time water gets on a leaf when it isn’t supposed to it can cause these blemishes. They’re nothing to worry about. Oftentimes you can get blemished cigars at a discount.

What about the white spots? Once again, assuming the spots aren’t a growth, they are probably the result of water damage. Water damage white spots are usually defined by clear outlines. They are equally harmless and won’t impact your experience. 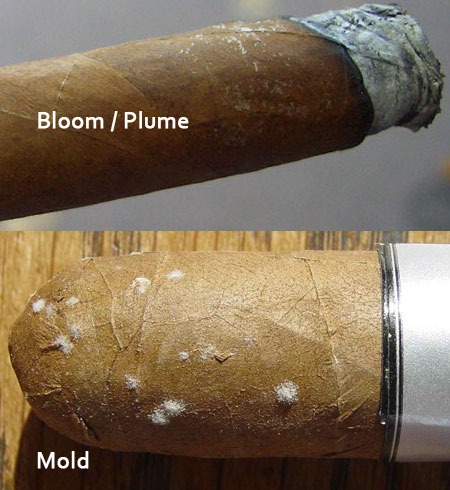 Mold, bloom, plume?      What are they and how do I recognize them?

Cigar bloom, also called cigar plume, is a type of crystallization which occurs because of the oils in the cigar. Bloom won’t impact the flavor of a cigar, and it only occurs when a cigar has been well kept for a long time period. Cigar mold, on the other hand, happens when your cigar is kept in conditions where humidity exceeds 80%.

Mold looks “fuzzy”, and bloom does not. The colors of mold can vary widely from white and yellow to blue or green. Note that bloom also is uniform in its appearance whereas mold is spotty and grows in clusters.

American Market Standard (AMS) wrappers are light green in color and are also called Double Claro, Jade, and Candela. This is due to the fact that this wrapper used to be very popular in the US back in the 50's.  English Market Standard (EMS) wrappers include Claro, Colorado, and Natural wrappers, and are made from tobacco leaves grown in Connecticut, Cameroon and Cuba. You can also run into SMS - Spanish Market Standard, which are Maduro and Double Maduro / Oscuro leaves.

Why are two countries referenced?

Sometimes two countries will be referenced in a cigar's technical specs, both referring to the wrapper leaf. This generally means that the seeds come from one country but were transplanted and grown in another. The first country name references the place the tobacco was grown while the second references the origin of the seed which was used. So let’s say you had a cigar which had a wrapper labeled as Ecuadorian Connecticut. This means that a seed from Connecticut was transplanted to Ecuador where it was grown into the wrapper leaf which was used in your cigar. 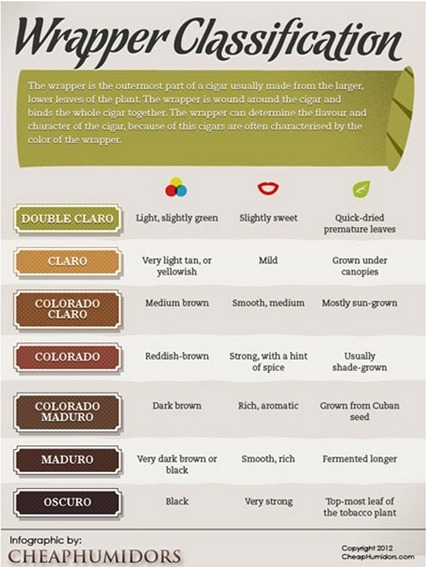 Here is an article from The Inspector at CigarInspector.com that explains the story about cigar wrappers, color, and problems.  Check out the site for further information on wrappers and cigars in general.

CAN I GUESS THE CIGAR'S FLAVOR OR STRENGTH JUST BY LOOKING AT THE WRAPPER?

It’s a common misconception that you can easily determine how strong or flavorful a cigar is by looking at the color of the wrapper, but this is not the case. Many people equate light-colored wrappers with light smokes and dark-colored wrappers with strong smokes, however this is not a reliable gauge as maduros can be rather mild whereas cigars wrapped in claro leaves may surprise you with their power.

How many different wrapper colors are there?  There are 50 different wrapper colors and the most used categories are: Double Claro (also known as Candela or Jade), Claro, Natural, Colorado Claro, Colorado, Colorado Maduro, Maduro, and Double Maduro/Oscuro. These categories are listed in rough order of lightest to darkest, though it can be difficult to tell similarly colored cigars apart at a glance.

According to experts, the cigar wrapper contributes to between 40% and 75% of the cigar's flavor profile, so paying attention to the wrapper is very important.  Where it comes from, what seed it sprouts from, and the care and attention it gets through the whole process are  some of the most important characteristics of choosing a cigar.  Plus, how it looks and feels to the fingers.  Always pay attention to the wrapper.

Wrappers, Not About Musicians...